One afternoon, Rebecca was sitting at her fireside, sewing, when she became aware of more commotion than usual from the direction of the Hutchinsons' house. Anne's children tended to be rather more undisciplined than her own. They seemed to be forever running through the house, splashing each other with water, and laughing uproariously. Today, though, the sounds did not sound happy. Idly curious, Rebecca rose, opened her door, and felt her heart stop. Anne's house was ablaze. Naked red men ran through the yard, seizing various family members, dispatching them with axes. 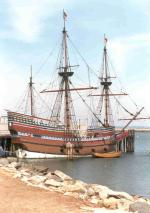 As she watched, frozen in place, Will Collins ran toward Anne's house. He fell, an arrow through his throat. Looking in Rebecca's direction, two dozen Indians began running toward her, part of them stopping at Collins' and Cornells' houses. Rebecca backed up, not knowing what to do. She felt incapable of outrunning these athletic warriors. She closed the door, barred it, and picked up little John from the floor, hugging him tightly. She tried to think. The other children were in the woods with Goody and some of the Cornell and Collins servants. John was off with Thomas on one of their merchant voyages, due back today.

Just then, Aaltje, her maid, came out of the servants' rooms toward Rebecca, tried to speak, but fell, a spear through her torso. The front door was being splintered by repeated, heavy blows...